In Service of Gold’s Gym

I had moved into my role as the Director of Operations at Gold’s Gym – Gurnee from elsewhere within the company.  I was generally aware of the processes I would be responsible for.  The role had existed in a format before me and when I took over I noticed the cracks that existed in current functions.  There had been a couple of people in the role over the years and it seemed that they never tried to improve the processes; they were comfortable with the status quo.  There was disorganization, there were lax protocols, and there was uncertainty.  It is in my nature to solve problems, to address these issues and improve the situation for all involved.

For those uninitiated, customers signed a contract for certain terms and time.  This was the underlying structure with which all processes and policies were built from.

Looking back to that time and the problem switches between one and to a multitude.  Multiple changes and designs based off the initial issue.

There was a disorganization within the file structure.  There were multiple versions of files spread as far as possible, there was no central location, the information collected was poorly thought out, and the files had descended into a copy of a copy which brought with it its own issues.

The information gathered on the old and decaying forms felt inadequate and lacking, it didn’t take into account anything beyond the brief concept of what the form should do.  The first goal was to rebuild the form system from the ground up, including the information that was needed for the Gym to function and information which mitigated any errors or uncertainty.  For instance, if a form required additional paperwork from the customer as part of its function, there was no way indicate if this was collected previously.  This meant consolidating, adjusting, iterating on designs.  The product would need to be malleable enough to support tweaks as new promotions were developed or changes to information required, to maintain the same theme but include areas for new information.  Further, these forms were color coded.  It was a template system that allowed the creation of new work quickly and to fit the niche as needed.

From there I removed the forms that were roaming the Gym.  In a practical sense, the forms shouldn’t be in more than 4 or 5 real locations, yet these were everywhere.  There will always be a shift of resources as time goes; a spreading out, but I was more worried about antiquated forms being used and causing delays with requests or inconveniencing customers through repetition or lack of access.  To deal with this, the form was stored within the copy machine and accessible to any employee.  This change was documented and explained to every manager.  Additionally, I met with each manager personally and walked them through the retrieval process.  I spoke with the two other directors on incorporating this technique into their workflow.  Both appreciated the efficiencies and error mitigation that this process brought.  My office was next to the copy machine; so I was available to help if there were any issues, technology can be difficult to use in new ways.  This allowed a single location that was the repository of all paperwork that was used; if a new form was implemented the remainder could be recycled and the new one distributed quickly.  If the managers ran out of the form, the copy machine would provide without having to search for an unmarked copy somewhere in a desk.

By now I have addressed disorganization and the somewhat random forms.  Every form that was filled out was filed in a secure room with few keys.  In the event that a customer felt their record was inaccurate, they could request an audit.  This was done with a surprising frequency.  The reason for this tended to be forgetfulness of the customer or someone trying to lie, with only a small few falling into true error.  This took time and it wasn’t always a given that myself or the owner would be available to retrieve files.  Before I took over, it was possible that a week could go by before a response was able to be given to a customer.

That feels like such a long time.  The system was built out further and the files were scanned into .pdf format.  These were then filed on a shared network drive with information about the account, the purpose of the change and a date of when it was filed.  While name and address were included, no sensitive information was saved in this fashion: credit, banking, or health information.  In the event an audit was requested, the manager could print a copy of the relevant paperwork without involving me or the owner.  I have to imagine that this saved 4-5 hours of work a week.  Or of non-work, as it is.

After this change, I brought my focus to developing proper protocols for the Gym’s Data Governance.  There were two employees who were competing within the same role and had two different work styles and viewpoints.  The deeper into understanding the process the more I began to feel that the organization was providing a much bigger headache than it needed to be.  After speaking with them, I divided their roles into two distinct positions which suited each’s style.

When paperwork reaches its End of Life (EoL) it gets moved to its own storage unit where it would sit for the requisite time before being shredded.  This information was organized alphabetically which made sense before it entered EoL but proved to be cumbersome to deal with after.  Essentially an audit of the entire storage unit would have to be conducted every time documents were ready to be shredded, wasteful of resources.  Moving this archive to a date based order proved to solve many of issues which were causing errors; a smaller audit of the files specific to the cause of action and less involvement from myself.

There was more that I accomplished with this system or that was built off those first steps. I could go into the changes to the roles of those involved, the creation of new roles, and the increased employee morale which came from the efficiency and prompt response to issues.  The employees found the changes easy to adjust to and enjoyed the more responsive audit requests, and the customers experienced those benefits in a slightly hidden manner.

There was less paperwork for the customer and what paperwork there was included plain English explanations of policies which might feel confusing.   There were areas that required signature, call to action, where we could inform about common issues with the request they were filing.  Some requests/addendums required a week to be processed based on systems outside the Gym’s control like waiting for the process server to return billing status and this paperwork included terminology to flag the paperwork on process and correct for those issues.  A lot of work went into properly informing the members of what they were signing, what it meant, the results of such, and finally protecting the gym’s interests.

There was an improved paperwork system to cut down on duplicate and unneeded forms while improving efficiency of the process.  Customers were given more useful and actionable information on what changes they were making to their account.  Interruptions were drastically cut down to the owner and me regarding access to locked files.  The system became more responsive when dealing with account audits, responding to customer requests, and dealing with issues outside the Gym’s direct control.

Below you will find a couple of the forms I created during my time.  It’s been many years since I was in that role and, sadly, I don’t have any original forms. 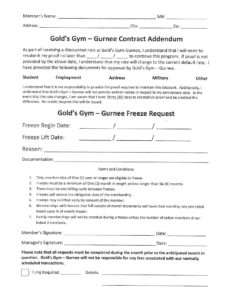 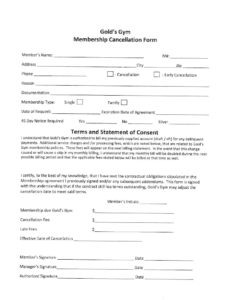 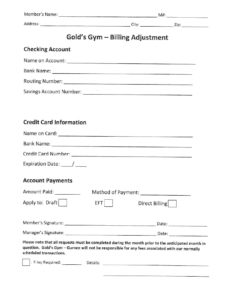 The company was sold, so there isn’t a future as such but I think about areas I would have loved to approach: Customer Journey Map their process and touchpoints or a deeper approach to customer needs.  As it was, I did a lot of work on adjusting policies to better serve the customer and this was definitely when I began to realize this was the direction I wanted to take my career.